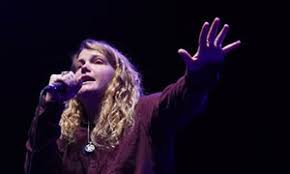 Already looking forward to seeing Kate Tempest live at the opening gig of the Brighton Festival, I had no idea what to expect from the other acts, but imagined something special.

Firstly Kate spoke briefly about how important the arts are in understanding narrative, creating empathy and being for all, acutely necessary in more desperate times, such as we’re living through right now. Big cheers.

Then Omar Musa, a poet and musician from Australia and Borneo, took the stage. We liked him a lot, shouting back positive heckles and cheering loudly to his caustic take on modern life, slicing through the crap in worldwide politics and media. He’s another much-needed artist like Kate speaking from the heart and to the souls of all people alive today.

Next Kat Francois, an inspiration of Kate’s from South London shared her moving and visceral poem ‘The Truth is Tongue-Tied’ in a powerful performance with its spot-on observations of humanity becoming ‘spineless, spiritless, voiceless’ as it scrolls passed all the horrors of the world. Her choking breathlessness to fit the words and sheer awesome presence completely mesmerised me. I felt her poem deep in by body.

What a build up to the main lady, on stage now looking anything like a ‘lady’ as it’s presented to us in the media, another thing so refreshing about Kate Tempest. She looks how she wants to look, no make up, hair as it dries, fresh-faced honesty. And what she shares most with her poetry is authenticity, needed so much in this world of fakery and sham.

Rolling a few of her poems, including my favourites London is Lost and Hold Your Own, into one 20-minute performance she can’t help but move you to your very core. So raw and full of real emotion, she inspires me most by expressing what I’ve known in my heart and spoken to many about for 25 years: That this ‘world’ we’ve created is all wrong, is playing with our heads and ruining the beauty of humanity and our home.

Lines that stood out for me this time include key message – ‘Doing what you please, is not the same as doing what you must’, ‘couldn’t we be doing things differently?’ and when people chant “we’re gonna be alright” is like the band playing on the sinking Titanic, a great metaphor for this collapsing civilisation, that I’ve often felt when partying. The same theme mirrored in London is Lost, that all this horror goes on in the world, helped by our abusive system, but stop stressing, shut up about it, have a drink and carry on. “Massacres, massacres, massacres, new shoes,” has to cut a wound in even the most non-existent awareness of the sick and strange reality we’re faced with every day. If people haven’t yet woken up to it, Kate Tempest will surely make them.

For me, her gig moved me even more than I thought it would. It was a call to action, to do more to make change, and to write a new narrative for humankind as we try to turn around the juggernaut of the corrupt commercial system we are imprisoned by and be free to create the world we want together.

And how the heck could you follow that? With some bonkers, bouncy and loud ska-punk mayhem from a South London band called Melt Yourself Down, who shocked everyone awake even more, with their loud drumming, blasting saxophones and shouts. Their energy was infectious and buoyant, leaving me with a smile on my face, and why not? Maybe we are about to turn things around, maybe we can all feel things changing.